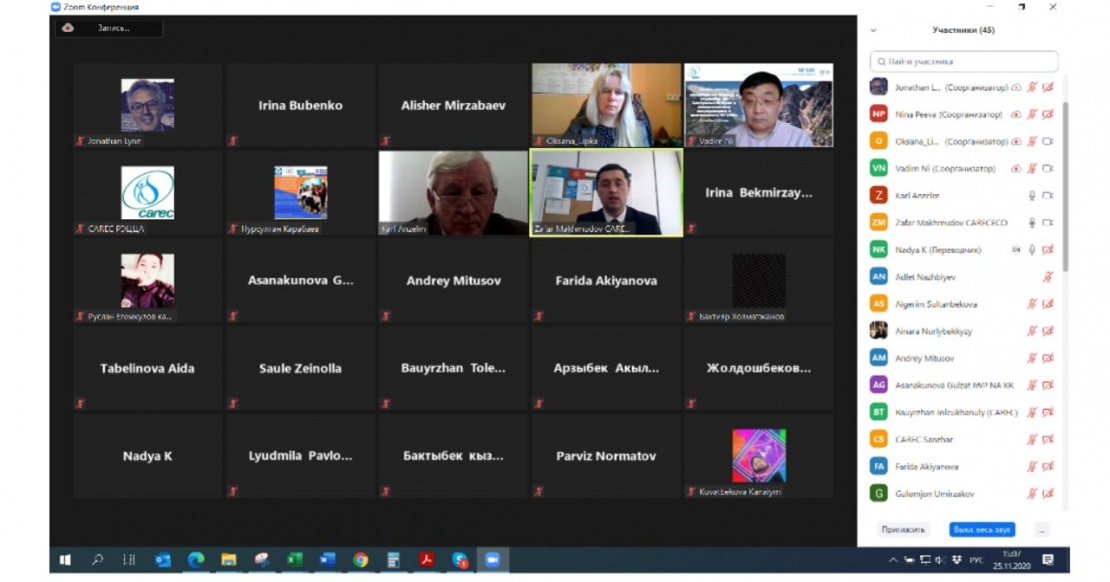 In recent years, climate issues have moved beyond a narrow circle of individuals. Therefore, the time to unify the forces and start acting at the level of governments, organizations, companies, society, and citizens has finally come. However, to act consciously and effectively, we need to understand the problematics of the issue, conduct scientific research and share their results.

On November 25-26, 2020, the Regional Environmental Center for Central Asia (CAREC) hosted webinars with the participation of representatives of the Intergovernmental Panel on Climate Change (IPCC). This organization is continually reviewing the results of modern scientific research on climate change. More than 80 scientists and students, representatives of civil society organizations and media from Central Asia took part in the webinars.

CAREC Executive Director Zafar Makhmudov opened the event by noting that this is a unique opportunity to discuss climate issues with representatives of the organization, whose reports serve as the basis for decision-making at the global level. Besides, IPCC was awarded the 2007 Nobel Peace Prize. He also underlined that countries' forward movement towards more ambitious contributions to the worldwide fight against climate change depends on our joint efforts.

Jonathan Lynn, Head of Communications and Media Relations at IPCC; Oksana Lipka, Leading Research Scientist at the Yu. A. Izrael Institute of Global Climate and Ecology (Russia); Alisher Mirzabaev, the Center for Development Research of the University of Bonn (Germany), took part in this webinar as international experts representing IPCC.

Oksana Lipka presented the scientific foundations of climate change by elaborating upon the climate and the climate system, the leading causes of climate change, the anthropogenic impact on the climate system during the industrial period, which led to the need for the urgent mobilization of efforts at the global level to combat climate change. She also presented relevant data on the contribution of individual sectors of the economy to modern global warming, emissions of carbon dioxide (CO2), methane (CH4), nitrous oxide (N2O) and other greenhouse gases resulting from human activities, as well as the main scenarios for the growth of the global average temperature by the middle and end of the XXI century. Ms. Lipka elaborated on such impacts of climate change as soaring temperatures and sea levels, declining Arctic ice and shrinking glaciers. At the end of her presentation, she focused on two primary areas of climate actions: reducing greenhouse gas emissions and increasing their absorption; adaptation to climate change.

Alisher Mirzabaev's presentation was dedicated to three IPCC special reports (Global warming of 1.5 ° C, The Ocean and Cryosphere in a Changing Climate, Climate change and Land). The participants not only got a chance to get acquainted with the key messages of these reports but also to discuss the consequences of scenarios of global warming of 1.5 ° C and 2 ° C, a rise in the level of the World Ocean by 1.1 meters by the end of this century, melting of glaciers and permafrost, as well as emissions greenhouse gases from agriculture and land-use sectors. The most attention in his presentation Mr. Mirzabaev paid to the issues of land degradation since these territories are home to from 1.5 to 3.2 billion people and global warming further enhances the processes of desertification and land degradation. The IPCC expert's presentation provided the basis for discussion of such issues as the contribution to the fight against climate change through large-scale planting of trees on the dried bed of the Aral Sea, changing dietary preferences and the need to reduce food waste and losses.

At the beginning of his presentation, Jonathan Lynn brought up the activities of the Intergovernmental Panel on Climate Change, the main milestones in the history of this organization. His subsequent presentation focused on how scientists from different countries and regions of the world participate in and contribute to the IPCC reports' preparation. Mr. Lynn's presentation served as the basis for a discussion of the low level of involvement of scientists from Central Asia in this organization's activities, the need for research and the preparation of publications that could be considered a basis for the preparation of IPCC reports.

During the first day, November 25, 2020, university professors and scientists from Central Asian countries were also able to share their experience in applying climate knowledge through the development and application of an integrated course on climate and hydrological modelling. On the second day, representatives of civil society organizations and media from Central Asia shared their experience working with climate information.

The webinars were organized within the framework of the "Climate Change Adaptation and Mitigation Program in the Aral Sea Basin" (CAMP4ASB), implemented with financial support from the World Bank.