How can we contribute to the work of the Intergovernmental Panel on Climate Change? 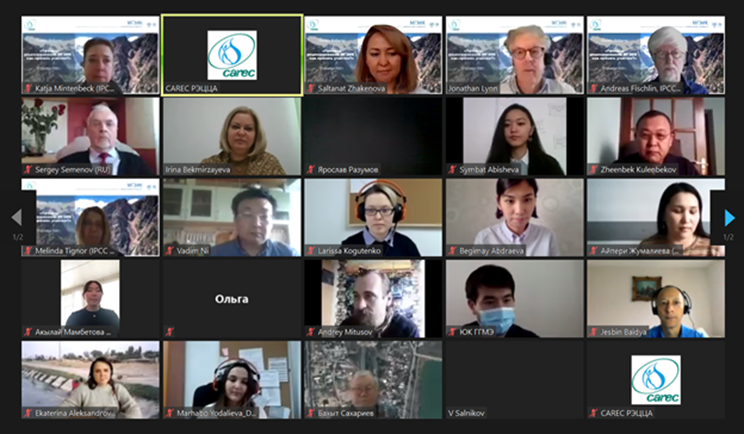 On December 21, the Regional Environmental Center for Central Asia (CAREC) held a regular event in cooperation with the Intergovernmental Panel on Climate Change (IPCC). The IPCC is a global organization that evaluates climate change research.

Webinar "IPCC Review Process - How to Participate?" was organized for representatives of the academic community of Central Asian countries within the framework of the project "Climate Adaptation and Mitigation Program for Aral Sea Basin (CAMP4ASB)", implemented with financial support from the World Bank. The event was opened by Irina Bekmirzaeva, coordinator of the Regional Group of the CAMP4ASB project. In her speech, she noted that, despite its importance, our region is very poorly represented in the IPCC reports. However, these reports serve as a scientific basis for making globally significant decisions in the field of climate change, such as the adoption of the Paris Agreement of the UNFCCC.

Participants of the webinar, held on December 21, got acquainted with information on how to become one of the authors of IPCC reports and how to participate in the peer-review process. The IPCC has three groups: Working Group I, which deals with the physics and science of climate change; Working Group II working on impact, adaptation, and vulnerability; and Working Group III on climate change mitigation. The IPCC strongly welcomes the participation of Central Asia representatives, noting that the second draft of the Sixth Assessment Report of Working Group II was recently opened for governmental and expert evaluation.

An introduction to the Intergovernmental Panel activities on Climate Change was provided by Jonathan Lynn, Head of External Relations for the organization. He spoke about the previously prepared Fifth Assessment Report and the Special Report "Global Warming of 1.5 ° C" and how scientists from different countries can participate in preparing such reports.

During the event, two Vice-Chairs of the IPCC Working Group II also made presentations. Dr. Sergey Semenov elaborated on the general process of organizing the work on the IPCC reports. Dr. Andreas Fischlin highlighted the uncertainty assessment of the IPCC reports, which is essential for providing scientific information on future climate change scenarios.

Science Director, Technical Support Division, IPCC Second Working Group, Dr. Katja Mintenbek, noted the opportunities for peer review of the Intergovernmental Panel reports on Climate Change. In particular, it was underlined that it is possible to comment on individual parts and even proposals of the draft report on your research activities' profile, providing links to relevant scientific publications. This participation option remains open for the Sixth Assessment Report for academics, researchers, national government officials, educators, young professionals and students from Central Asia. To participate in the peer review of the report prepared by Working Group II, you must register by January 22, 2021.

At the end of the webinar, there was an active discussion of the possibilities of including scientific research on climate change in Central Asia in the IPCC reports. To summarize, we can say that scientific articles published in different languages can be considered, but it is necessary to submit an abstract of the article in English. So, opportunities for the contribution of scientists and researchers from Central Asia to the preparation of IPCC reports are open, and CAREC, within the framework of its status as an independent observer of the IPCC, will promote regional representatives' role in these processes.