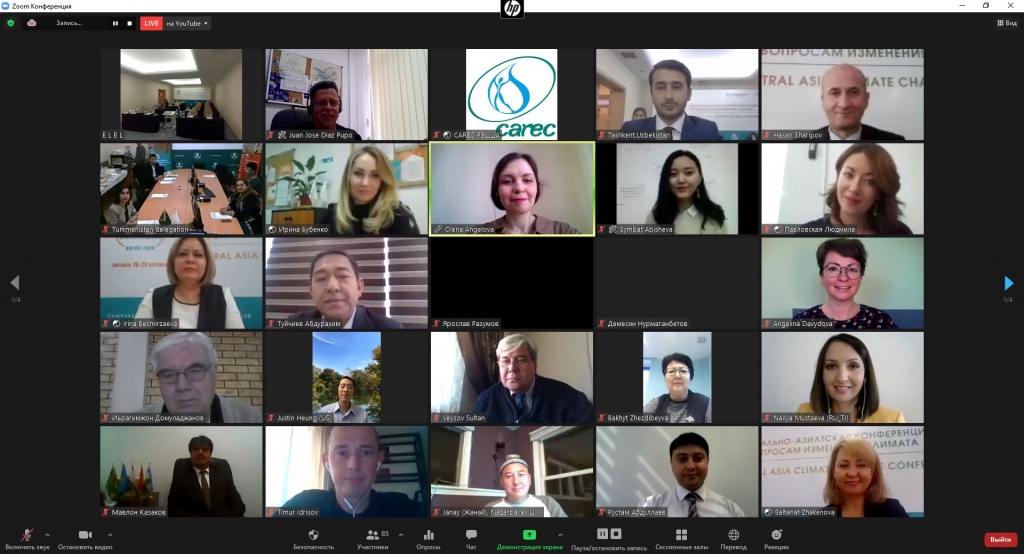 October 23. 2020 was the final day of the Third Central Asian Conference on Climate Change (CACCC-2020). During this day of the conference, the thematic session of the previous day on financing climate change actions in times of pandemic (COVID-19) was continued, and the discussions of all days were summed up.

During the first part of the session, participants of CACCC 2020 reviewed the opportunities to attract available public and private resources for climate action and international support.

Ms. Irina Bekmirzaeva, Regional Coordinator, CAMP4ASB (CAREC), made the presentation "Role of climate investments in implementing the Paris Agreement in Central Asia." In her speech, Ms. Bekmirzaeva presented the review of climate finance on each country of Central Asia for the period of 2010-2020 and some global and regional data. She reviewed the main obstacles for effective work with the climate funds, namely low institutional capacity for targeted work, weak linkage to country budgets and investment programs, the need to implement monitoring and reporting of projects and accreditation of national entities for direct access to climate finance, and the lack of a clear link to the decarbonization of economies. Ms. Bekmirzaeva also noted the great experience of CAREC in the field of climate change and the products of the CAMP4ASB project that are important for climate finance, namely the methodological guide for assessing climate investments (developed jointly with SIC ICWC) and the Central Asian Climate Information Platform.

The further discussion of climate finance was continued at the panel session along with the participation of representatives of governmental agencies of Kazakhstan, Tajikistan, Turkmenistan and Uzbekistan.

Ms. Ainur Kopbaeva, Head of Climate Change Adaptation Department of the Ministry of Ecology, Geology and Natural Resources of the Republic of Kazakhstan, in her presentation informed on the development in the country of the legal and institutional framework for attracting climate finance to achieve targets of nationally determined contributions to the Paris Agreement. Ms. Kopbaeva also noted Kazakhstan's experience with the Readiness Program of the Green Climate Fund (GCF) and presented plans for future work with GCF.

Mr. Hasan Sharipov, Deputy Head of the Main Directorate of Budgetary Policy in the Real Sector of the Economic of the Ministry of Finance of the Republic of Tajikistan, informed that the country had created favourable conditions attracting international investments in various sectors of the economy. Mr. Sharipov highlighted the main aspects of these improvements in the country's climate investment, including the new legal framework, the expansion of financing instruments, and the application of incentives for international investments.

Mr. Berdy Berdyev, Head of the Department for Coordination of International Environmental Cooperation and Projects of the Ministry of Agriculture and Environmental Protection of Turkmenistan, informed that the 2019 National Strategy on Climate Change provides mechanisms for attracting climate finance from the budget, non-budgetary funds, the private sector, as well as from international sources. He also noted the creation of the National Clean Climate Fund, many ongoing projects with the attraction of climate finance, as well as progress in work with the Green Climate Fund.

Mr. Abdujabbor Abdujamilov, a Leading Specialist of the Ministry of Investments and Foreign Trade of the Republic of Uzbekistan, informed on the Strategy of Development of Uzbekistan for 2017-2021 that is aimed to modernize the economy and eliminate obstacles for its development. Mr. Abdujamilov noted that the current share of renewables in Uzbekistan is 10,2% and consists mainly of hydropower and plans to develop solar and wind energy with the 2030 target for renewables – 22% (1.5 GWT of hydropower, 5 GWT of solar energy and 3 GWT of wind energy). His presentation also covered many large-scale projects on wind and solar energy and landfill gas utilization for electricity generation.

In the question-and-answer part of the panel session, the participants noted the following obstacles for attracting climate finance:

They also expressed the views on the great potential of the Central Asian countries to reduce greenhouse gas emissions through the implementation of projects on renewable energy, energy efficiency in the housing and municipal sector, and in private companies, regional projects in Central Asia, including on adaptation to climate change in the Aral Sea basin, and agriculture and water management. 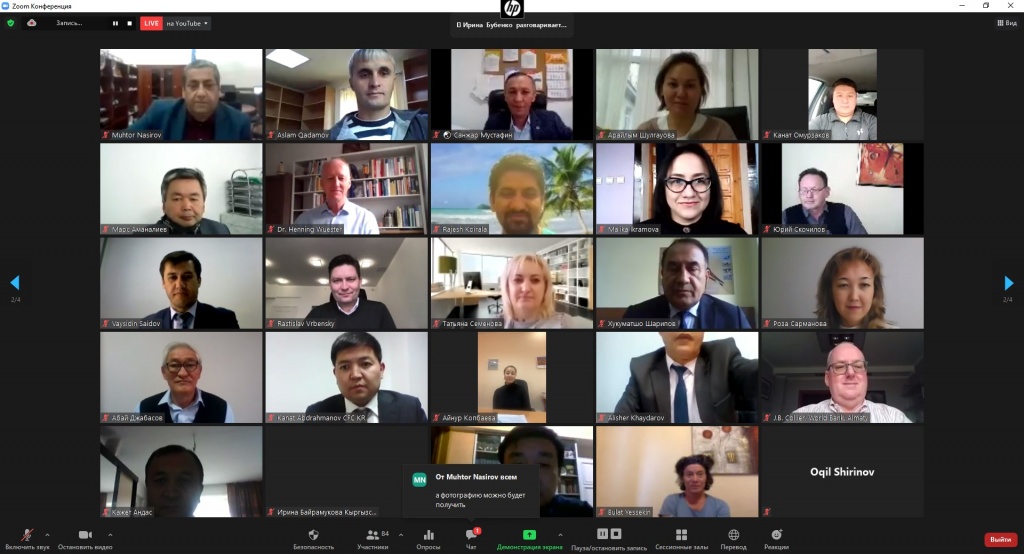 Further, the presentations were made by the invited international speakers of CACCC-2020. Dr. Rastislav Vrbensky, Founder & CEO of AvantGarde Ideas, introduced "Private investments to climate change actions in Central Asia – challenges and perspectives". In his speech, Mr. Vrbensky noted that private sector investments in climate finance at the global level, excluding commercial, financial institutions, are less than 50%. At the same time, he mentioned that more and more companies are publicly disclosing their climate risks and their carbon footprint. More than 8,400 companies are involved in relevant global climate disclosure initiatives. Further, he touched upon the progress with climate finance in countries of Central Asia. He presented the examples of the auction mechanism for renewables and the first issuance of green bonds by the Damu Fund in Kazakhstan, the large-scale ten-year plan for the development of solar and wind energy in Uzbekistan, the establishment of a facility for financing climate projects in Tajikistan with the support from EBRD, EU, GCF and South Korea. Overall, Mr. Vrbensky believes that the region has high potential and needs in climate finance.

Dr. Henning Wuester, Director, Initiative for Climate Action Transparency (ICAT), made the presentation "An evidence-based green recovery: Leveraging climate transparency to mobilize additional finance". In his presentation, Mr. Wuester noted the importance of setting up transparent climate actions as the Paris Agreement calls for it. He said that ICAT had developed ten assessment guides for measuring the effects of policies and actions on reducing greenhouse gas emissions, adapting to climate change, responding to sustainable development needs and driving transformational change. Mr. Wuester stressed the importance of a programmatic approach to mobilizing climate finance, which is essential for the Green Climate Fund but also crucial in mobilizing private investments for climate action. Mr. Wuester concluded his presentation by saying that transparency in climate action should increase the ambition of nationally determined contributions to the Paris Agreement.

Mr. Dilovarsho Dustzoda, Director of the Agency on Hydrometeorology of the Republic of Tajikistan, thanked the organizers for the successful organization of the Third Central Asian Conference on Climate Change. He noted that it was impossible to hold the conference in Tajikistan due to the global pandemic. However, he proposed to conduct the next one in Tajikistan, Dushanbe and asked the participants to support this proposal.

Based on the results of the fifth day of the conference, Ms. Nailya Mustaeva, CAREC/CAMP4ASB, summed up the results and emphasized the following key messages::

At the closing session of the Third Central Asian Conference on Climate, the following speakers made closing remarks summing up the event:

"I would like to note that all the thematic sessions organized within the framework of this conference were held at a very high level, thanks to meaningful presentations and constructive discussions. This demonstrated many common approaches and the concern of our region on climate change, the development of climate policy at the national level, in the context of the pandemic, as well as the growing importance of the water issue under the influence of modern global challenges."

"As all of you, I was extremely disappointed not to be able to meet together in person in Dushanbe. And I sincerely hope that we all will be able to be there for the fourth conference next year. But at the same time, I am impressed with you and the ability we all have to adapt to continue this important dialogue even in such uncertain times. This year globally and in our own local communities, we've seen how low-carbon future can look like in terms of reduced emissions and cleaner environment.".

«Five days of the conference flew by quickly; we had more than 320 participants, of whom 44% were women. The event was attended by representatives from 18 countries, with over 220 people from Central Asia. We have heard 30 speakers, of which 18 are international speakers, and 12 are members of national delegations. 126 questions were asked, and the total time for discussion was more than 7 hours…».

M-r Makmudov concluded his speech by summing up the conference with the key messages included in the Final Document of the Third Central Asian Conference on Climate Change.

The presentations of the CACCC-2020 speakers can be found at the following link: http://gofile.me/3xIiD/hId9gulpD

CACCC-2020 is organized by the Regional Environmental Center for Central Asia (CAREC) within the framework of the World Bank project "Climate Adaptation and Mitigation Program for Aral Sea Basin" (CAMP4ASB).