The Third Central Asia Climate Change Conference (CACCC 2020) began online on October 19, 2020. The conference is a continuation of the World Bank's initiative on climate change knowledge and regional information exchange in Central Asia launched in 2013.

"This conference has been serving as one of the main regional platforms for the discussion of climate change issues and climate change dialogue for the last seven years. Central Asia remains one of the most vulnerable regions to climate change, which leads to more frequent extreme events, including heavy rainfall, mudflows, landslides, droughts, etc. Farmers in Central Asia are already experiencing these changes today when their crops' yield suffers from droughts and floods. Central Asia's inhabitants are already experiencing these changes themselves when heavy rainfall when floods pose a direct and real threat to their lives. Today our future is in our hands. It depends on whether we sit back or act! And we must, indeed, act together!".

Mr. Sulton Rakhimzoda, Chairman of the Executive Committee of the International Fund for Saving the Aral Sea (IFAS)

«Climate change is one of the priorities for the Regional Environmental Centre for Central Asia (CAREC). The organization established in 2001 by the five Central Asian states' governments, with the support of international partners, has been serving as a platform for regional and intersectoral cooperation and a knowledge hub on sustainable development in the Central Asian region for over 19 years. CAREC has implemented in the Central Asian countries more than 250 projects with a total budget of more than 50 million US dollars with the support by such partners as the World Bank, the European Union, the United States Agency for International Development (USAID), UN agencies, the Organization for Security and Cooperation in Europe (OSCE), the German Society for International Cooperation (GIZ), Swiss Agency for Development and Cooperation (SDC)". 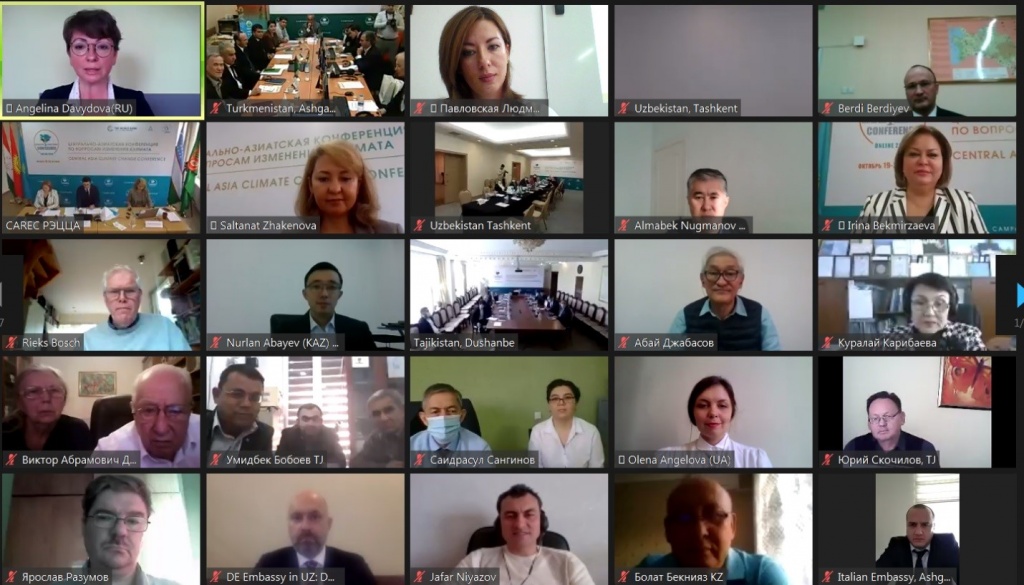 CACCC 2020 has been serving as the primary platform for the dialogue on climate change and sustainable development in Central Asia. Representatives of regional and international organizations, governments of different countries take an active part in it, and some of also made speeches at the opening ceremony of the conference: 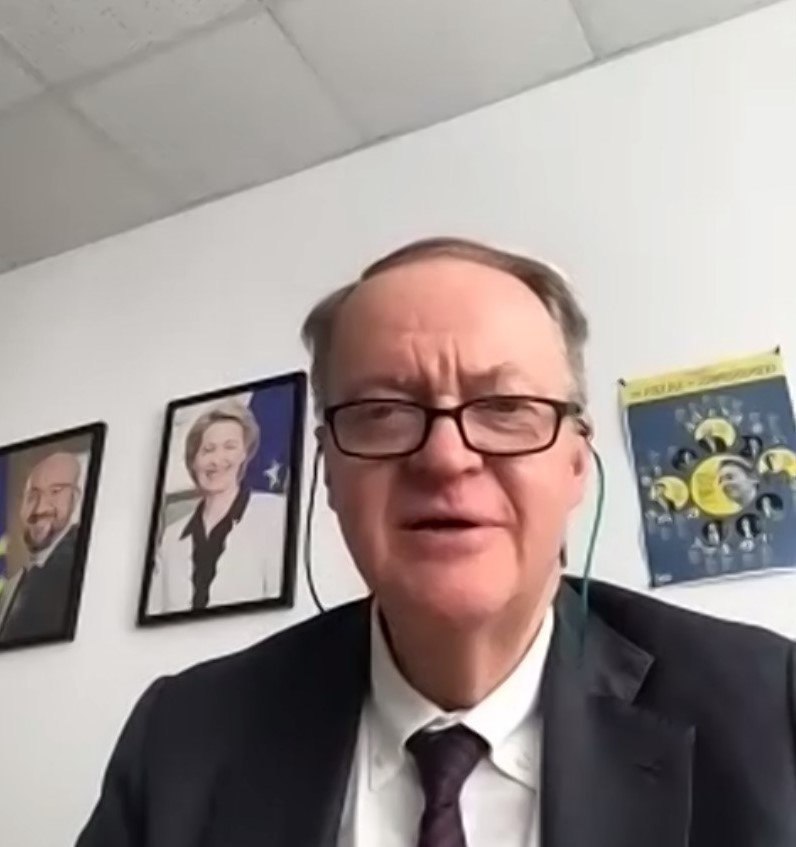 Mr. Sven-Olov Carlsson, Head of the Delegation of the European Union in Kazakhstan, noted that on September 17, the European Commission presented its plan to reduce greenhouse gas emissions by at least 55% by 2030, compared to 1990 levels; previously, this indicator was 40%. He also reconfirmed the European Union's readiness to provide expert and technical assistance for the development of green infrastructure in Central Asia countries.

Mr. Roberto Morassut, Vice-Minister of the Italian Ministry of Ecology, Lands and Sea, has noted the importance of the green recovery of economies from the global pandemic. He also presented some examples of relevant measures taken in Italy, including subsidies for up to 110% for energy modernization of buildings, incentives on the use of bikes, electric scooters and car-sharing.

Dr. Youba Sokona, Vice-Chair of the Intergovernmental Panel on Climate Change (IPCC), has noted the importance of scientific evidence-based policy-making on climate change. He also spoke about the progress with the Sixth Assessment Report. He presented some findings of the IPCC special reports on Ocean and Cryosphere, Land, Global Warming of 1.5°C as evidence of the need for urgent climate action.

The thematic focus of the first day of CACCC 2020 was on climate change impacts and policy-making process in times of pandemic. The session's main objective was to mark the importance of 2020 at the start of the Paris Agreement implementation and exchange information on national actions undertaken by the states of Central Asia on climate mitigation and adaptation. The session also touched upon climate and other (COVID-19) risks and discussed their relevance in climate policy formulation and enhancement of actions in times of pandemic.

At the thematic session of the first day of CACCC 2020, the presentations were made by the following speakers:

Sir Laurie Bristow, Regional COP-26 Ambassador of Great Britain, made the presentation "COP 26 – a road towards enhanced climate actions". In his presentation, Mr. Bristow noted the Paris Agreement's approach based on the engagement of all countries in efforts to hold the increase in the global average temperature to well below 2 °C, including developing countries by providing them financial support for climate action. He also showed by using the UK experience as an example that climate action does not burden the economic growth. The UK GDP growth has been increasing by 73% from 1990 with the 43% reduction of greenhouse gas emissions and with the decrease of GHG emissions per capita from 14 tons per year to 7 tons per year.

Dr. Olga Pilifosova, Manager, Adaptation Programme of the Secretariat of the UN Framework Convention on Climate Change (UNFCCC), made the presentation "Marking 2020 for enhanced climate actions: challenges in times of COVID-19". In her presentation, Mrs. Pilifosova noted the activities by the Secretariat to keep the momentum on the Paris Agreement in the conditions of the global pandemic. It includes, inter alia, the launching the Climate Hub 360 on the UNFCCC website, conducting training on improved reporting and transparency in September for Central Asia, the UNFCCC Climate Change Dialogues (November 23 – December 4, 2020) and the global campaign Race to Zero with the participation of a wide range of non-governmental participants (November 9-19, 2020).

Mr. Massimo Cozzone, Programme Manager of the European Centre for Environment and Health of the World Health Organization (WHO) and

Mr. Vladimir Vladimir Kendrovski, Technical Officer of the WHO Regional Office for Europe, made the joint presentation "Addressing environment, climate change and health in the COVID-19 pandemic: a perspective from WHO Regional Office for Europe". During their presentation, it was noted that climate change and health aspects are integrated into the WHO European Process on Environment and Health. They presented on direct and indirect impacts of climate change on human health. They showed that the values of health co-benefits of climate change mitigation are approximately twice as large as the mitigation costs.

Ms. Zulfiya Suleimenova, Deputy Director of the Department at the Ministry of Ecology, Geology and Natural Resources of the Republic of Kazakhstan, informed on what Kazakhstan is doing on the development and implementation of the climate policy and noted the process of updating the nationally determined contribution to the Paris Agreement, development of the Concept of Low-Carbon Development, strengthening the national GHG emission trading scheme and new legislation on the integration of climate adaptation into the governance of agriculture, water, forestry and civil defence.

Mr. Dilovarsho Dustzoda, Director of the Agency on Hydrometeorology of the Republic of Tajikistan, informed on the progress with updating the nationally determined contribution to the Paris Agreement with its further submission to the Secretariat of the United Nations Framework Convention on Climate Change, adopted in 2019 the National Strategy for Climate Adaptation of the Republic of Tajikistan until 2030. He also noted that Tajikistan is a mountain country with a low adaptation capacity, and it is the most vulnerable to climate change in the Eurasian region. Thus, climate adaptation is the priority for the country.

Mr. Berdi Berdiev, Head of the Department of the Ministry of Agriculture and Environment Protection of Turkmenistan, informed on climate action measures taken by the country, including the ratification of the global climate agreements, adoption and updating in 2019 the National Strategy on Climate Change, current work on the preparation of the IV National Communication on the UN Framework Convention on Climate Change. He also noted the taken measures on planting trees under the National Forestry Programme since 2013 (it is expected that up 10 million trees will be planted in 2020).

Mr. Bahriddin Nishonov - First Deputy General Director of Uzhydromet, informed on the consistent policy on climate mitigation in key sectors of the economy and climate adaptation in the most vulnerable sectors. He presented some examples of taken measures, including the adoption in 2019 the Strategy of Transition Towards the 'Green' Economy for the period of 2019-2030 and the establishment of the Inter-Agency Council for its implementation, developed National Plan on Implementation of the Paris Agreement which is currently under consideration by the Cabinet of Ministers, adoption in 2019 the Law on the Use of Renewables, implementation of different programmes and projects on renewables and climate adaptation, current work on updating the nationally determined contribution to the Paris Agreement and preparation of the IV National Communication on the UN Framework Convention on Climate Change.

After the presentations by the speakers, the discussion with all participants took place at the conference. It concerned the issues of regional cooperation and information exchange on climate mitigation and adaptation and the development of improved nationally determined contributions to the Paris Agreement. 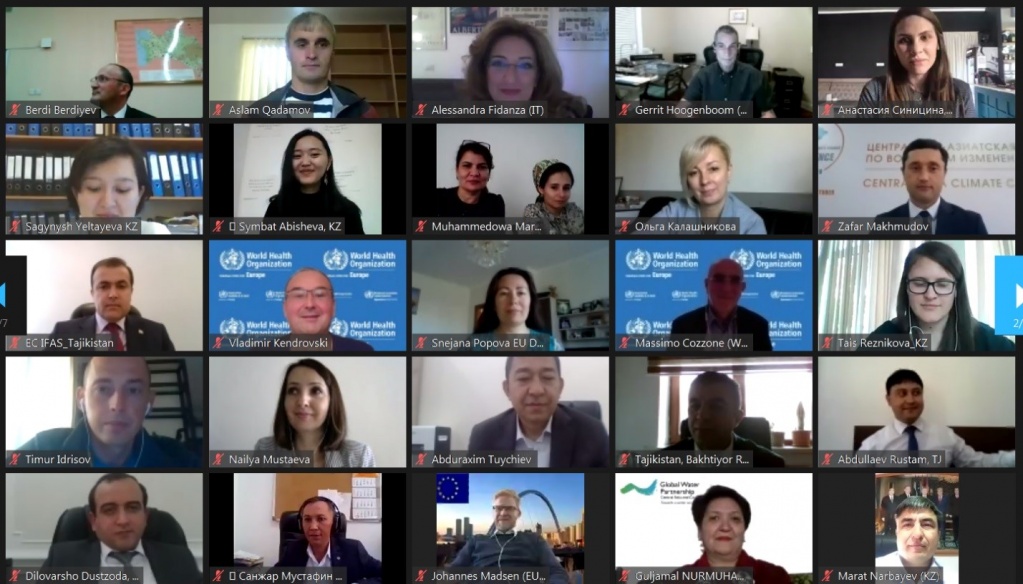 At the end of the day, Mr Zafar Makhmudov, CAREC Executive Director, summed up the session by the following key messages:

● The Central Asian region has already encountered the consequences of climate change that negatively impact the water resource management sector, agriculture, energy, health, and others, which is worsened by the dramatic impact of COVID-19.

● The year 2020 is a starting year for implementation of the Paris Agreement, when all countries, including those in the Central Asian region, are achieving their national goals on reducing greenhouse gas emissions and adaptation during the pandemic. Given the realities of the present time, the Central Asian region is under interrelated risks: vulnerability to climate change, population health, and the economic crisis.

● Intersectoral cooperation on social development issues, preservation of natural resources, and protection of human health in the face of climate change play a vital role in the comprehensive planning of national policies and action programs.

● Progress of the Central Asian countries in developing programs and improving national legislation on climate change has been observed; however, we should take an effort to integrate climate-related risks and response measures into national sustainable development programs and economic growth. At the same time, it is essential to consider common regional interests and positions of the countries in the region in the run-up to the 26th Conference of the Parties.

● All stakeholders' role is essential, including public and private institutions, in shaping policies and the decision-making process in the area of climate change and related areas, both at the national and local levels.

CACCC 2020 was organized by the Regional Environmental Center for Central Asia under the framework of the World Bank's project “Climate Adaptation and Mitigation Program for the Aral Sea Basin.